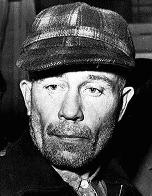 Blurgh, I can’t believe I’m writing about real horror. This stuff makes my skin crawl, which is weird considering how many books I have on the subjects of serial killers and forensics and crime scenes. I guess it’s a love-hate relationship.

I thought of Ed Gein last night, when some friends from Louisiana braved Interstate 10 to visit us so we could go to the Dam B Haunted Woods near Woodville. Awesome place, by the way. They had zombie paintball! I was able to shoot teenagers–er, I mean zombies–while trying to make it through a mini-obstacle course without losing my “arms”. I wore a flag football-type belt, with two severed arms in place of flags. A zombie had to try to rip my “arms” off before I shot him in the head, the classic undead kill shot. Don’t worry, the zombies wore helmets.

The Woods opened at sunset, so the drive up there took us through some spooky wooded country. More than once, our Louisiana buddies made a Texas Chainsaw Massacre joke, and it occurred to me, as we were driving home, that they thought TCM was based on something that actually happened in my dear state. I recall this same urban legend being passed around in middle school, usually around Halloween, with my classmates swearing up and down that it happened in Zavalla, or maybe Jasper, and that if you drove to those towns at night and parked on the side of the road, you’d still be able to hear screams coming from the woods.

It didn’t help that Tobe Hooper’s 1974 movie was “inspired” by a true story; people hear “inspired” and mistake it for “based on”, which is an entirely different concept. Hooper’s movie was loosely inspired by Ed Gein, a Plainfield, Wisconsin farmer.

Gein was born at the turn of the twentieth century. His mother was domineering, and raised him to believe that sex was sinful. He never married, and when she died in 1945, he sealed off her bedroom and most of the farmhouse they had lived in. He confined himself to one downstairs room and the kitchen.

You can see where this is going. Sexually repressed recluse; overbearing dead mother. It sounds a bit like Psycho, which was also based on Gein.

Gein was fascinated by the female form (I don’t want to know why, I don’t want to know why . . . ) and, with nothing else to do since Mommy died, took up gravedigging. He brought home female corpses and dissected them. He also fashioned a skin suit–yuck–so he was also the inspiration for Thomas Harris’s Buffalo Bill in Silence of the Lambs. In 1954, he decided he wanted fresher specimens. He went after women close to his mother’s age, late fifties, and in 1957, he kidnapped and murdered the mother of a sheriff’s deputy. The deputy and the sheriff, following a lead that Gein was seen around the deputy’s mother’s hardware store shortly before her disappearance, went to Gein’s farmhouse.

Ever hear the phrase “house of horrors”?

Gein had a human skin rug on his floor, a human heart on a dinner plate, a bowl made from a human skull, and a table propped up by human shin bones, among other things.

Not surprisingly, he was put in a mental hospital. He died in 1984 of respiratory and heart failure. The hospital staff described him as gentle and polite.