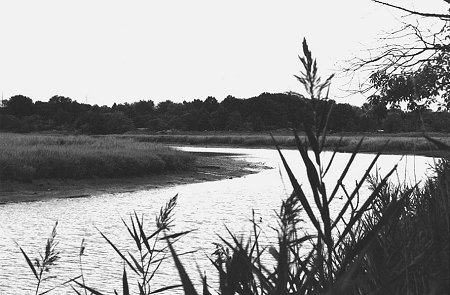 (Rerun here, because it’s the hundredth anniversary of these attacks.)

I’m profiling a different sort of killer today: the shark (or sharks) responsible for the Matawan Creek attacks in 1916.

It started on July 1, 1916, when 23-year-old Charles Van Sant arrived in Beach Haven, New Jersey. Eager to escape the heat, the vacationing Philadelphian dove into the Atlantic Ocean. He was about fifty feet from shore when other swimmers noticed a large shadow following him. He never heard their warning cries. The shadow pulled him under. A few moments later, the area where he’d been turned red.

Alexander Ott, a former Olympic swimmer, raced to Van Sant’s rescue. Ignoring the injured man’s attacker, Ott found Van Sant, pulled him up to the surface, and then to shore. Van Sant’s legs were mangled. He bled to death on the beach.

If this had happened today, it’d be on the CNN ticker below Wolf Blitzer. Back then, the public, and most scientists, didn’t believe that sharks attacked people. Living people, anyway. It was widely thought that they were opportunistic scavengers who went after bobbing corpses, like gilled buzzards. The attack on Van Sant was an aberration, something that happened once every hundred years. Unlikely to occur again.

That’s because they didn’t have Shark Week. 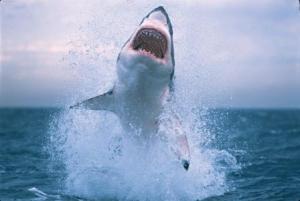 On July 6, in Spring Lake, New Jersey, twenty miles north of Beach Haven, bell boy Charles Bruder decided to spend his day off in the ocean. A few minutes later, he disappeared. Someone saw a spreading stain of red, and alerted the lifeguards, who jumped in a rescue boat and paddled to the scene. Bruder’s arm stuck up from the waves. The lifeguards grabbed his arm and pulled him into the boat, marveling at how light he was. Then they saw how much of Bruder was missing below the waist. His last words were, “A shark got me.”

Panic finally set in. The resort towns installed metal nets in the water to protect the few brave bathers. Motor boats filled with men armed with shotguns patrolled the area.

But the shark that attacked Van Sant and Bruder, assuming it was only one, was gone. It might have swum farther out to sea.

Captain Thomas Cottrell spotted a 10-foot-long shark near the mouth of Matawan Creek on July 12, 1916. The creek was eleven miles from the Atlantic, and the shark was swimming upstream, straight to the small town of Matawan. Cottrell raced alongside the creek, warning the townspeople. Many thought he was nuts; how could a shark, any shark, be in the shallow creek?

(I have to cut in here; Matawan Creek is a freshwater creek, but the bull shark is capable of “rebooting” itself and adapting to freshwater. Scientists and historians are divided as to whether the Matawan shark was a bull or a great white; research done in 2011 showed that the full moon of the lunar cycle, which coincided with the attacks, would have raised the salinity of the creek by more than double, making it possible for a great white to survive.)

One and a half miles upstream, 12-year-old Lester Stillwell and four of his friends were playing in the creek. As Stillwell floated in the water, one of the boys saw the shark a second before its jaws grabbed his friend’s body and yanked him under.

Stillwell’s buddies fled the water and ran to Main Street for help. Stanley Fisher, who ran a dry cleaning and tailor shop, was one of many who responded, as was Cottrell, who commandeered a motor boat and searched the water for Stillwell. Fisher and two friends dove into the creek. After a half-hour of searching, they were about to give up when Fisher screamed. When they turned in the direction of his scream, he was gone, but he reappeared a few seconds later, frantically fighting the shark that had snatched him.

He finally won. Rescuers pulled him into a boat and took him to shore. His right leg was hideous, the flesh gone from groin to kneecap. He reported that he had the body of Lester Stillwell in his arms when the shark attacked. He was taken to Long Branch Memorial Hospital, where he died being wheeled into the operating room.

Shortly after the attack on Fisher, the shark struck again, this time half a mile downstream from Wyckoff Dock, the site of the Stillwell/Fisher attacks. Fourteen-year-old Joseph Dunn was exiting the creek in response to a warning about a shark in the water when he felt something grab his right leg. He later said he felt his leg go down the shark’s throat.

I do not want to ever find out what that feels like.

Joseph’s brother Michael and the other two friends then played Tug of War with the shark. They won. Joseph spent two months in the hospital and somehow kept his leg.

The next part of the tale of the Matawan Man-Eater makes me wonder how it would be handled today. I’ve read a few accounts of recent shark attacks, and the shark usually seems to get away. No one goes after it. This might be because the recent attacks happened in the big, bad, vast ocean instead of a tiny forty-feet-wide creek, but still. Would the shark–or any sharks that happened to be in the vicinity–be hunted down, or would PETA step in and say “Hey, you were in the water all enticing and shit. It’s your fault”?

Back then, people did not fuck around. The Matawan citizens punished the creek by shooting, stabbing, and dynamiting it.

Yeah. They stabbed the creek. Take that, H2O.

Somehow, the shark escaped. Two days after his death, Lester Stillwell’s mutilated body was found floating in the creek near a railroad trestle. Stillwell and Fisher were both laid to rest on July 15.

(Update! The podcast The Dollop did a live show with fellow podcasters My Favorite Murder on the New Jersey shark attacks. Find it on your favorite podcast app. I use the one that came with my iPhone.)