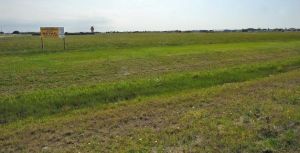 We reached the airport without incident. No sign of the truck. Tracy, I noticed, slumped to her right, close to the door, far from me.

I passed the main entrance to the airport, aiming instead for the maintenance road, which would take us to the field. I cut the headlights before turning on it; the road was coated in white rocks, practically glowing under the almost full moon. I kept the speed down, kept my eyes open for the truck.

We passed three hangars, four large storage sheds, a big-ass tractor. Then the road petered out, and there was the field, and a hundred yards or so beyond it, the runway and control tower.

I pulled a U-turn, then killed the engine. “Now what?”

Tracy popped open her door. “Now we walk. I buried it near the runway.”

I stared at the distance, the darkness, the mosquitoes already bouncing off the windshield. “Of course you did.”

I opened the trunk. She grabbed a shovel. I kept an eye on her, thinking she might take a swing at me. She propped it on her shoulder and started crossing the field. I debated grabbing my Glock from the center console, then decided against it. I hustled after her.

We walked in silence, the ground crunching under our shoes. It hadn’t rained in a while. The mosquitoes tracked us down. I slapped at one on my neck, my arms. “Should’ve bought some Off,” I muttered.

“Here,” Tracy said, stopping. “Do you have a flashlight?”

She shined the light at a large rock near her feet. “Here it is.” She clicked off the phone, handed it back to me.

“I expected more wandering.” I looked around. No planes on the runway. The airport wasn’t designed for large passenger jets; it was used for light passenger planes making runs to and from Houston and Dallas.

“I made it a straight shot from the road to this rock.” She bent down, picked up the rock, tossed it aside. She stood up and started shoveling.

I joined in. After a couple of feet, my shovel blade hit something soft. I turned on the light again while Tracy tossed aside her shovel and knelt. She reached into the hole and grabbed what I had hit–a blue canvas duffel bag. She yanked it free and set it on the grass. She unzipped it. Money, crammed into plastic freezer bags.

She closed her eyes for a moment. “Thank God,” she murmured.

“So now what?” I dropped my shovel next to hers, by the hole.

“Now–” she stood up– “I buy a ticket to Wyoming. Give me a lift to the airport?”

“It’s like right there.” I hooked a thumb over my shoulder.

I was hot, sweaty, and had a mosquito banging against my right ear. But a Coke did sound good. I smacked the bug, made my ear ring. “Yeah, all right.”

The tiny airport didn’t have a snack bar; it had three vending machines stacked against one wall, near a bookcase stuffed with tourist information and restaurant coupons. Tracy gave me a dollar for the soda machine (the cans were a buck-fifty, but she darted to the ticket counter before I could shake her down for the two quarters) and I selected a Coke. It rumbled out. I picked it up, tapped the top before popping it open.

I sipped it while turning around, nearly bumped into a man in a black polo shirt and black slacks. His black hiking boots put the finishing touches on the Goth look.

“No worries.” He smiled. Tilted his head to the ticket counter. “That your friend over there?”

Here came the hair rising on the neck, the tingling, a few seconds too late. “No,” I said, my voice even and cool. I stepped around him.

Another man in black sat in a chair a few feet on my left. There was a row of the chairs, near the plate-glass windows that looked out onto the parking lot. There was a security guard out there smoking a cigarette. He smiled and patted the seat next to him. “Have a seat,” this guy said, while the first one bumped into my back. I came very close to elbowing that dude, but then I glanced down, saw the tip of a gun pointed near my left side.

I had a seat. The guy with the gun sat next to me. Sandwiched between two guys. Not a fantasy of mine. When Tracy finished at the ticket counter, she turned and saw us. She looked  pale and scared. But not very surprised.

The guy on my left, the gunless one, stood up. “Hey there Tracy. Mind coming over here?”

I expected her to break and run. Instead, she came over, the ticket in her left hand, the bag in her right. The gunman nudged his weapon into my ribs. “Get up,” he said.

“You know, you really should tell me that first, then use the gun when I don’t do it,” I said.

I stood up. So did he. The first guy put his arm around Tracy’s shoulders, gave them a squeeze. “Good to see you. I’d say that Eric says hi, but you know he can’t.”

“I’m sorry about that,” she said. “But I told you, I didn’t have anything to do with him–”

“Shut up, all right? Come on, it smells funny in here. Let’s get some fresh air.”

He escorted her outside. I followed, shadowed by the gunman. We walked by the security guard. He had his back to us, still smoking his cigarette. I didn’t feel like getting the poor sap killed, so I kept quiet.

The bad guys’ truck was parked at the far end of the lot, close to the highway’s frontage road. The gunman opened the tailgate and told us to climb in. Tracy went first, then I hopped up behind her. We sat with our backs to the cab, while the gunman climbed in, closed the tailgate, then sat against it, the gun on us.

Tracy had been contemplating the duffel bag crumpled on her lap. She raised her head, checked it out. “No,” she said. “H&K.”

The truck started up. We pulled out of the parking lot. The gunman smiled at us. “You know what kinda gun it is? It’s the one that’s gonna kill you.”

“What action movie did you steal that from?” I asked.

The gunman rolled his eyes. We turned onto the maintenance road. He said, “It’s an H&K P30.”

“Fuck me sideways,” I said.

The truck stopped. The gunman stood up, kept his 9 millimeter on us while his buddy dropped the tailgate. We climbed out.

“Now,” the gunless one said, “get to walking.” He pointed at the field.

One thought on “The Werewolf and the Money – 3”