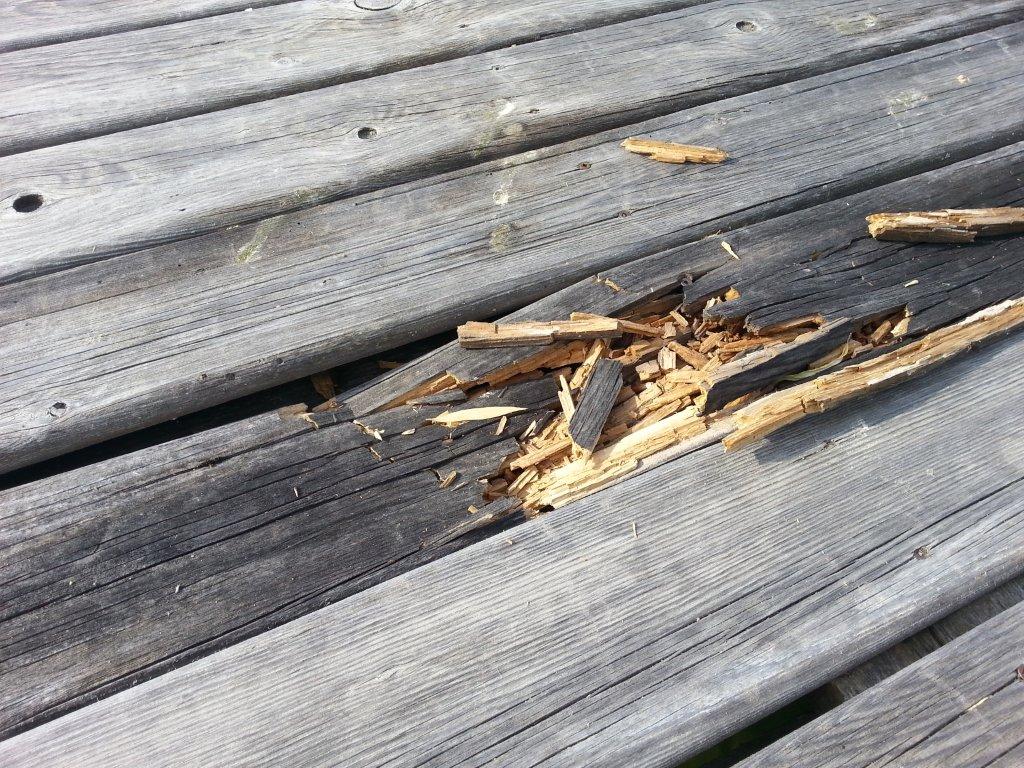 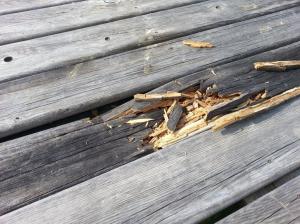 In my head, it was a perfect Hollywood movie-style exit: my thighs flex, and I leap for the doorway, clearing the narrow porch completely. I land on the balls of my feet and my palms, and then I spring to my feet and make for the darkness between the trailer and the RV.

In real life, I leapt for the doorway, but I didn’t clear the porch. I landed on the edge of it, and my right foot broke through a rotten board. There was a flash of pain from my ankle, then the world tumbled around and the next thing I knew, I was on my back in the dirt, looking up at the porch.

“Ow. Fuck,” I wheezed. I rolled onto my right elbow. The fall had knocked the wind out of me, but I’d managed to hold onto the gun, so kudos to me, I guess.

And hey, I’d heard myself speak, and the ringing in my ears was gone. Cool.

I blinked, rubbed my right eye with the heel of my hand. I had my vision back, too. Cool cool.

I got to my feet. My back ached from the impact, and my head still hurt, but other than that, I felt pretty good.

Good enough to make the change?

I debated just leaving. I had the keys, and I had the clock ticking with Sergeant Thibodeaux.

I heard Corbett and Harris talking. Just the murmur of their voices; I couldn’t make out any specifics. I dropped into a squat and duck-walked under the porch.

I concentrated. My teeth wiggled in their sockets. Relieved, I backed off. Okay, I could wolf out again.

I holstered my weapon. I wasn’t in the mood for a gun battle, and anyway, that shit only works in Liam Neeson movies. The reality is that I’m a crappy shot when I’m not on the range, and Corbett had no trouble nailing me earlier.

Plus, I was a damn werewolf. That came with certain perks, such as claws, teeth, and the element of surprise. No one expects a five-foot-ten (I gain a couple of inches in the transformation), red-furred werewolf.

They had tried to kill me, after all. Had I been human, they would have.

I stripped off my gear and clothes.

I crawled the rest of the way under the trailer, coming up near its back door. The change had taken a few seconds longer than expected; I put it down to still not being at a hundred percent.

No steps leading up to the back porch. I reached up and tried the door knob. Unlocked.

I took care to make no noise as I opened the door and crept inside the trailer. I was in the hallway. The Sons of Anarchy blanket was on my left. I picked my way down the hall, my clawed feet noiseless on the threadbare carpet. I moved the blanket aside with a clawed finger.

Corbett and Harris were at the open front door. Harris had wrapped his injured hand in an old shirt. Corbett had duct-taped a flashlight to the underside of his rifle barrel, and he swept its light over the yard.

“Her car’s still there,” Corbett said.

I stepped into the living room and moved toward them, still silent. The blanket brushed over my furred back. My heart pounded hard in my chest. I felt, as I always did in this form, two different things: raging blood lust mingled with a sort of clinical detachment.

I was within arm’s reach when Corbett turned. I had time to register his wide eyes, his brown teeth, and then I grabbed his head and Harris’s and smashed them together. Corbett’s nose broke against the side of Harris’s skull.

I let Harris go and grabbed Corbett by the scruff of his neck with one hand while the other slashed open his belly. I dug my hand in and ripped up, stopping at the bottom of his rib cage. He dropped the rifle. I snatched it up and threw it into the TV.

Harris was on his hands and knees, scrabbling toward the hallway, making mewling noises. It took me three steps to catch up to him. He turned his head and saw me.

I swung my left arm in an arc and ripped out his throat. I tilted my head at the tock! noise his head made when it hit the carpet. I bent down and twisted his head for good measure, snapping his neck.

I straightened up. Corbett was still alive, but barely. I padded over to him. He was sitting down, his back propped against the doorway. I knelt and watched him die. I wanted to tell him that this wouldn’t have happened if he hadn’t tried to kill me, but I couldn’t speak while a werewolf, so I stayed until he stopped gurgling.